The famous painter Giovanni Segantini, as well as poets and philosophers could not do without them in their day. Likewise for the hikers and sunworshipers today. The panoramic view of the lake plateau and the surrounding mountains from Muottas Muragl is captivating. It is among the most beautiful scenery of the Upper Engadine. Indeed, there are few places in Switzerland where you can immerse yourself in this Alpine feeling to such an intense degree and with as little effort as here. This postcard idyll does not even need an Instagram filter. In short, it’s a breathtakingly beautiful vantage point that would be hard to beat. What’s more, even getting there is a fantastic experience: the venerable Muottas-Muragl mountain railway has been climbing the steep slope up to 2,453 metres above sea level for over 100 years. 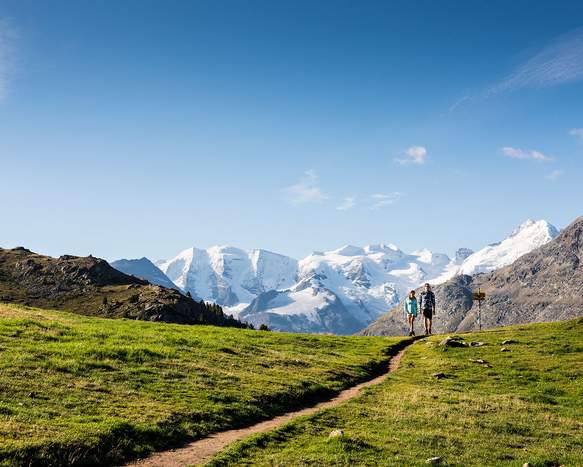 Alp Languard There are few places in Switzerland where you can enjoy this Alpine feeling as intensively and with as little effort as here. 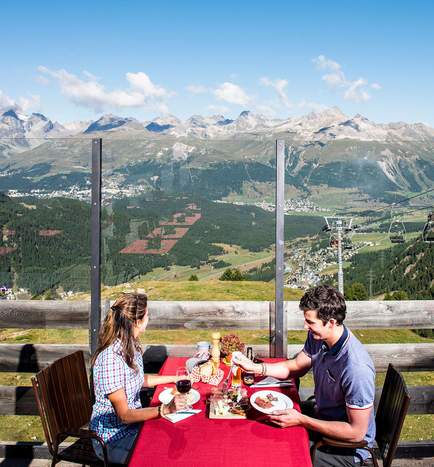 Restaurant Alp Languard The terrace offers magnificent views of the Bernina Massif and the surrounding mountains. 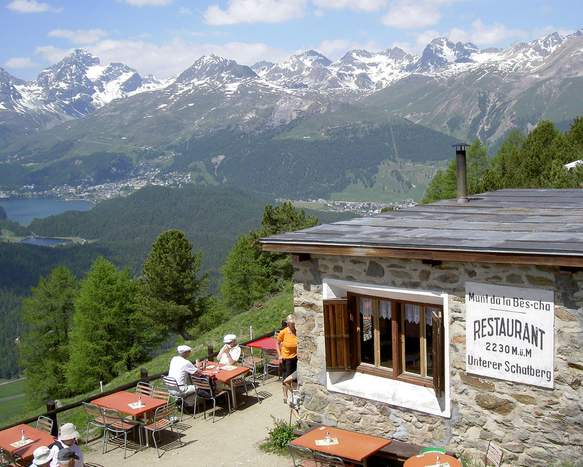 The sunny plateau of the Engadine

Once you arrive at the top, you exit the mountain station and step onto a viewing terrace that looks reminiscent of a ship's deck. Below, the Upper Engadine lakes sparkle like diamonds in the sun. To the left, in striking contrast, the 4,000-metre Bernina Range soars high, with its striking Piz Palü and massive glaciers. But watch out: that much natural beauty can be overwhelming, so it is best enjoyed on the move. Just around the corner lies the start of the "Philosopher’s Path", which is groomed daily in winter. Those who prefer more action should try the sledge run. In summer, the high-altitude hike up to Segantini Hut should be on every bucketlist. There, in the former creative site of Giovanni Segantini, these days delicious local food is served. The homemade barley soup is an absolute hit!

Alp Languard: Where ibex are at home

Those who wish to avoid the steep climb to Segantini Hut can hike the 7-km-long and almost flat trail between Muottas Muragl and Alp Languard. Sitting at the halfway point is the charming mountain restaurant Munt da la Bês-cha. The total hiking time is about 2.5 hours to Alp Languard above Pontresina. The terrace of the Alp Languard restaurant offers beautiful views over the Bernina Range. And if you’re lucky, you may even spot some ibex here. No surprise: the region is home to the largest colony of ibexes in the Grisons. And the best part for hikers: you can purchase a "Rundwander-Billet" [round trip ticket] (ride up to Punt Muragl – Muottas Muragl and ride down Languard Pontresina or vice versa). Remember to discover Pontresina's Ibex Paradise.

The Georgy-Hütte, situated below the Piz Languard at 3,200 metres above sea level, is the highest mountain hut in the Engadine. Hosts and guests alike never fail to be enthralled by the unique views over the surrounding mountains. Anyone who registers can also stay in a shared room.

The Romantik Hotel Muottas Muragl offers one of the most beautiful sundecks of the Engadine. Tip: enjoy mountain dining at sunset.

The Restaurant Munt da la Bês-cha, in English "lower sheep mountain", is situated above Pontresina on the path heading toward the Höhenweg. Engadine delicacies and homemade rhubarb pie, coupled with breathtaking views, feature daily on the menu.

The Paradis Hut is in the heart of one of the largest wild mountain goat colonies on Piz Albris. It serves simple dishes – the top insider tip is Pia’s delicious and freshly prepared cakes. Please reserve in advance by calling +41 79 610 36 03.

High above the lake plateau on the Schafberg sits the Segantini hut. Located in the former creative site of the famous painter Giovanni Segantini, these days delicious local food is served.