In Pontresina, the famous eternal ice is right on your doorstep. Indeed, with 173 glaciers, the Engadine is truly a landscape “on the rocks”. They surround the highest peaks of the Eastern Alps like ice cubes around a lemon wedge in a martini glass. The undisputed #1 is the Morteratsch glacier. It is about seven kilometres long, making it the longest glacier in the Engadine. An equally impressive spectacle of nature are the others glaciers in the region such as Roseg, Tschierva, Sella and Pers glaciers. 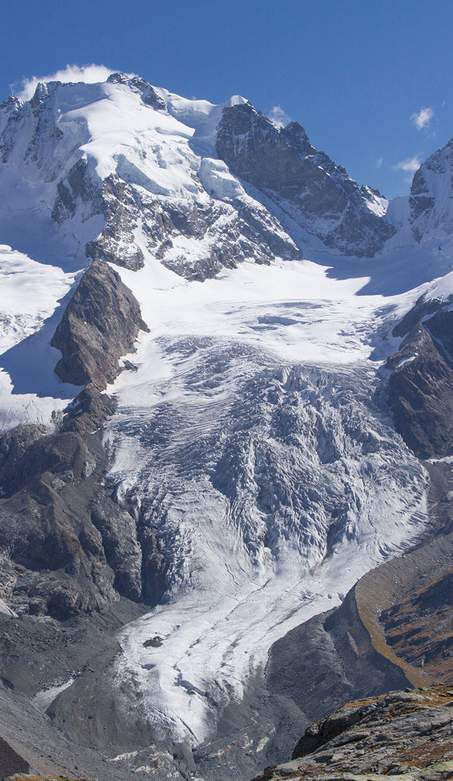 Magnificent glacier world The Morterastch, Roseg, Tschierva, Sella, and Pers glaciers are among the most famous glaciers in Engadine.

Under the wintry snow cover, the mighty white giants are hardly recognisable. Only the occasional crevasse can be seen, allowing a glimpse into the blue of the eternal ice. Descending on your own into the eternal ice is dangerous – it is preferable and advisable to book a guide at the Bergsteigerschule Pontresina. They know the glaciers like the backs of their hands. The ice caves are equally fascinating. They occur in the summer when the meltwater makes its way to the outside.

Accumulation area of the glacier

Whether a glacier grows or shrinks is related to how much glacial ice is growing in the so-called accumulation zone above the snowline. This ice does not form from frozen water, but from snow that has not melted away in the summer. For a glacier to be in balance, the accumulation area must be twice as large as the "ablation zone" below the snowline where the ice melts.
Anyone who walks through the archaic mountain landscape of the Engadine as a hobby glaciologist in the late summer will quickly become aware of this phenomenon. The spot where there is still snow on the glacier marks the accumulation area.

The children's book series "Sabi's big dream" is an adventure tour for children between 5 and 12 years. Children are given a booklet and playfully follow the story of the children's book. In the process, they collect stamp impressions at various information points. Once all the stamps have been collected, the booklet with the solution can be presented at the Pontresina Tourist Information. The children will receive a small surprise. Booklets are available at the Tourist Information Pontresina, in most Pontresina hotels, at the Camping Morteratsch and at the Alpschaukäserei Pontresina. Glacier trail